We are moving. It’s just something we like to do when I am in my last trimester. I think it’s probably because I am so sweet and gentle and never complain. I am also very organized, but not demanding, and really make the experience special for everyone. Fun fact, this is the second time we have done this when my final weeks of pregnancy coincide with the hottest weeks of the year.  Again, we make these choices because of how well I manage my delicate state. Really, I am a joy to be around.

Let’s save all the moving talk for next time, k? This time I have greater adventures to extol:

Sunrise bathes the sleeping couple in a rosy glow. The firefighter caresses the cheek of his sleeping bride, she awakes and sees his gentle gaze echoes his words, “You are so beautiful.” She snorts, recovers, grunts as she snuggles closer, murmuring, “I need to pee.” He helps her roll out of bed and she waddles to the bathroom. When she returns their bed has been taken over by the tiny humans.

This happy family goes about their Sunday in normal fashion, not realizing death has invaded their lives and will soon rear it’s ugly head.

After a morning spent with family and friends at church, they buckle down packing, loading up, and storing everything but the bare essentials of what a family of six needs to continue existing (p.s. it is a surprising amount of STUFF). After the kiddos are tucked in, the exhausted couple fall into bed

(I’m going to go ahead and shift point of view here because I don’t want to keep telling the story like this and since no one is paying me to try to write well, I can DO WHAT I WANT…oh yeah, hormones are still a go.)

As we were talking before going to sleep I noticed a dull pain happening in my mouth. Now, I run the whole gamut of crazy pregnancy related stuff and have had a similar sensation in my teeth before while pregnant. It is the same weird hormone that causes my hobbit feet to become SIZES larger. So I casually mentioned to the firefighter that I thought that was happening again. Because he keeps copious notes of all of my pregnancy symptoms past and present he knew exactly what I was referring to and was also very interested to know more about the magical journey of baby growing/he was falling asleep during my discourse.

Welp, I woke up around 2 am to go potty and was really surprised by how much pain my mouth was in. I took some tylenol and tried to sleep, but it was impossible. When we got up in the morning I did the super normal thing and started googling. I decided I had a pregnancy granuloma. It did not even occur to me that this could be related to anything but pregnancy. I called my Ob’s office and they snorted at my super rare diagnosis and told me to call the dentist.

I set up an appointment for that afternoon and got the kiddos and I ready for a meeting I had that morning.

The pain mounted with every minute and I could see my face was beginning to swell. By  noon I could no longer emote and every movement I made reverberated painfully through my skull. Finally, it was time for my dentist’s appointment. X-rays showed one of my front teeth had died (what the what??) and that it had become infected. He prescribed antibiotics, some pain meds, and a root canal. I told him the pain was becoming too much and asked if I could get a shot of antibiotics to kickstart the healing. He confirmed with my Ob that I could go get a shot in my tush. So I left there thrilled to get a root canal and a shot in my butt, two things that are on my Top Ten List of Things I Never Ever Want To Do. That is how much pain I was in.

The hilarious Dr. who administered my hiney shot took one look at my face and asked if I had been doing one of those lip challenge things. Clearly he missed his calling. I would have told him he should have pursued stand-up, but talking hurt too much. I just thanked him, silently and duck-faced, for what I knew would heal me. Then I picked up my prescriptions, drove home and welcomed the pain killers and antibiotics into my body. Now I was ready for sleep and knew I would wake up feeling much better!

Only I never slept. The pain med hardly took the edge off and my face was continuing to swell. I was in so much pain I went to the freezer, grabbed a handful of ice and just stuck it on my face, the infection was so bad and my face was radiating such heat that the ice just kept melting. I could no longer lay down, because the pressure was too intense. I called the dentist’s office and left a message and was surprised when a few minutes later my dentist himself called to see what was going on. He told me to come in as soon as possible in the morning.

So I took the kiddos to Parent’s Day Out, thankful that the timing of whatever this was was at least happening while my kids were easily occupied for 6 hours. I went back to the dentist’s office, nearly unrecognizable from the swelling. I sat in the chair and he warned me there was no way what he was about to do would not hurt, but that I would absolutely feel relief from it. I was in no state to argue and the promise of relief was all I needed.

Then he called everyone who wasn’t a patient in his office to come watch what was about to happen. As the huddled masses gathered ‘round to watch my duck face explode I found a spot on the ceiling and made it my beacon of sanity. He sliced and squeezed and narrated the whole process as I pleaded with my ceiling spot to not let me pass out. Initially, I did feel intense relief and hope flooded my body and pain addled mind. I went to my inlaws house to take pain meds and try to rest. But the pain and pressure started flooding back. I tried ice again and it melted so fast. Tears of pain and hopelessness were pouring. After a few hours I called the dentist again. They told me to come back.

Here it starts to get fuzzy. I was in such intense pain, I can only describe it as agony. It took over my senses and focus. All I could do was register pain and the moment I was in. There was no moment before or after, only the conscious effort of existing in the present. I know I sat in the chair again. I know he looked at me again. I know everyone who looked at me and had seen the progression of my face’s metamorphosis, cringed. I think he cut again. I know I had a panic attack and was put on oxygen. I know the pressure of the mask was too much. My sweet dentist cared for me and ached that this infection was more than any office setting could treat. It was time to go to the hospital. He called my husband and let him know it was time. He called my Ob and she called ahead to the hospital to have me admitted immediately.

The firefighter met me at the dentist’s office and my sweet dentist hugged me and his staff just exuded such kindness and care and I tried to float without lumbering my pregnant body as gravity and all movement threatened to murder me with pain. I had to drive myself, because we have four kids. There was no other way. The firefighter led me in his truck, full of our kiddos, as I drove myself. He had to lead me because my brain literally could not work out how to get to the hospital.

I would say, of all the things in life that should signal adulthood to me, driving myself to the hospital was it. I’m a grown up.

When I got there I had to sit in the waiting area for what felt like hours, though I am sure it was much less. My face now resembled a character from Planet of the Apes. The swelling had disfigured me from my forehead to my jaw. People could not stop staring. And I could not move. Tears were just pouring as I prayed for my mind and soul to focus on the hope that soon I would be put on antibiotics and soon they would give me pain relief.

I was taken to the high risk pregnancy part of the hospital, given morphine, and taken for x-rays. I never felt the morphine kick in. They started my two antibiotics and started me on a pain med cocktail every two hours. They monitored the baby and gave me medicine for sleep. The first night I slept about an hour. The second night, two hours. The first couple of days continued to be excruciating.  At one point my veins kept collapsing and I went two hours between courses of antibiotics and my face started swelling and getting hot again. So they changed up my antibiotics and even more strictly administered them.

You are probably tired of reading this tale of woe. Im kinda tired of remembering and writing it all out. I’ll finish this tale up later. I’m sorry. 🙂 My blog often becomes a journal for me and this is an experience I just have to get out of my consciousness. So after I finish this story I will move on to sharing the joy and less-puss-more-poop side of family craziness again. 🙂

And because y’all know I am a photo documenting spazz, here are some pics of this awful journey.  I regret that I do not have pictures from when my face was in full Planet of the Apes Mode because I was in so much freaking pain I couldn’t even…

So this here is a pic of me from that Sunday. I was trying on maternity dresses at Target. The only thing swollen was mah belly. Little did I know in a few hours, my face would try to murder me.

Here is a pic from the Drs office Monday afternoon, right before getting a shot in my tushy. I am barely able to show emotion. 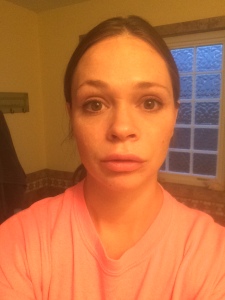 These pictures are from Monday evening, right before bed. My lips are not normally so luscious and I am not one to duck face.

These were taken in the wee hours of Tuesday morning. Um, something is definitely wrong here. 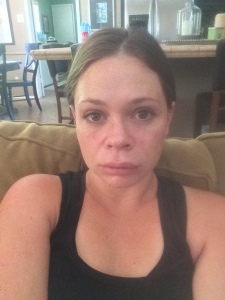 This is Tuesday morning at my inlaws after the first incision and draining.

This is a few hours later. 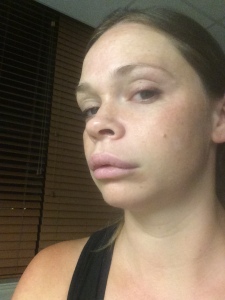 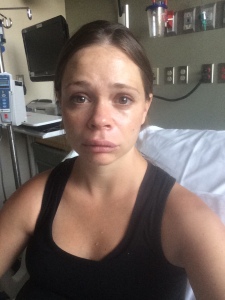 This is me. Weeping uncontrollably (though immovably) in my hospital room. I am all alone. I am in so much pain. I am pathetic. Notice the two tears that have fallen on my chest. Weep with me.