Last night my boys and I had a very important conversation:

Zeke: “What I don’t understand is, how come the prince in the movie Cinderella is so in love with her and wants to marry her? They didn’t ever talk and they don’t even know each other’s names!”
Me: “I have wondered that too, Zeke. Very wise of you to pick up on that.”
Connor: “Yeah. Cuz she is really weird. She talks to mouses and puts clothes on them.”

Exactly. May they always see the crazy before they become enamored with the pretty.

I shared this little snippet on the Facebook. My father-in-law replied with a link of a man discussing the “Hot vs. Crazy matrix”, whereby women are generally regarded in varying levels of crazy and the relationship a woman’s cray cray has to her attractiveness. The important take away from this very scientific video is that all women are crazy. I’ll concede.

That matrix works with men, too.

Our family is going to go on vacay

(P.S. go ahead and expect me to mention this ALOT for the next 4 weeks, because it is a HUGE deal, not to you, but to this manic-planning-pregnant mother of four the idea of loading these tiny booger eating humans on an air plane, coaxing them to be quiet and not talk loudly about farts for hours, then convincing them they do not actually want to wrestle an alligator in Florida…<sigh> I really am excited…and also trembling.)

So I made a list of everything everyone needed for vacation attire and Amelia and I went shopping. We went to Carter’s and they were having an amazing sale and I had a coupon and then I remembered Easter is coming up and I might as well pick up a few back-to-school items and…I called the firefighter as we were leaving and before giving him my total I shared with him all the details, how I had a coupon, and everything was on sale, all the money saved, all the thoughts and planning, all the…

“Uh, are you asking how much did I save?”

He was not super impressed.

I assured him that I would go thru our hand-me-downs and use a very discerning eye and return what we didn’t really need at this time.

As Amelia and I drove home the firefighter called to let me know he was working in our little garden area and was burning an area for reasons that make sense to people who know stuff about land.

As we got closer to our house, we smelled the burning, saw the smoke. Our ENTIRE YARD WAS ON FIRE. Flames licking greedily a perimeter that was steadily closing in on our home, leaving a black void in it’s wake. I first see my little boys; shirtless and soot covered, whooping and hollering at this wild scene. And there’s the firefighter, grinning sheepishly, holding our garden hose. He said it was a perfect day to do this. That he called the sheriff’s office to let them know he was going to burn off our lawn. He had it all perfectly under control.

Now, he can deny it all he wants, but I saw a very direct correlation in the SETTING OF OUR ENTIRE LAWN ON FIRE, and my spending all that money.

Clearly, mathematically, and scientifically the Crazy vs. Hot Matrix proves the firefighter is smokin’ hot. (soooooo many fun puns in that, my nerd brain is exploding)

And y’all better believe I made a substantial return to Carter’s today. 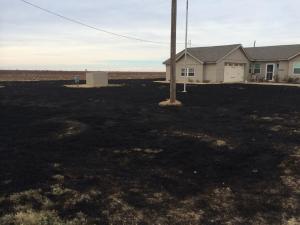