So sorry to all my readers (mom) for my delay in posting this week. All my spare time went to obsessing reading about Ebola. Then I shame spiraled into doomsday prepping. Our pantry has expanded to include 50 pounds of rice, 25 pounds of beans, enough canned goods to feed a small army (our family), and plenty of gallons of water to create a moat around our house should the need arise. Oh and I bought 25 pounds of salt for FOUR dollars. The salt is not necessarily for us, but from all of my research on the apocalypse we will be able to use it as currency. So while we may not be wealthy now, I feel pretty confident in our future. I do still need to build a solar oven and discover how to grow coffee, but I figure we are in good enough shape to regale you with our latest adventure.

Oh October. Here you are again, whispering cooler weather is coming. I see it in the Uggs paired with athletic shorts, smell it in the pumpkin everything, feel it as I break a sweat wrestling bananas and oranges away from the old testament-type plague of fruit flies. But mostly I hear it in the voices of my children, “when are we gonna get costumes for Halloween?”

Generally speaking, the firefighter and I are shocked when holidays, birthdays, and anniversaries arrive. Every. Single. Time. Thus, at the last possible moment, we buy in haste and repent in leisure. It is who we are. However, our children (and their Nana) were not about to sit back and watch as the world sold out of cool costumes and we tried to convince them that dressing as a turtle or a ninja is just as cool as a Ninja Turtle. Or that one could be a spider and the other could dress as a man and together they would be Spider Man. The firefighter even offered the suggestion that they make their own costumes. I recall being a ghost one year and I got just as much candy as the fairy princesses. Connor was not impressed with my idea of painting a paper plate as Captain America’s shield.

Which lead us to Party City. Make no mistake, “party” is a misnomer, though it was populated like a city. They had oodles of costumes, clearly this would be our one stop costume shopping mecca! Oh my lanta, no. Our daughter was immediately pleased with the selection of princess costumes. So pleased she dropped her doll. Which we will both figuratively and literally return to in a bit. Our youngest boy was looking at the costumes with a very discerning eye. This boy wanted a Captain America costume in royal blue with muscles. Yeah, ya hear that Marvel? My boy is not impressed with the Navy Blue and Dark Maroon Captain America. Welp, they had the navy with muscles in his size or the royal without muscles in his size. Oh and it did not come with a shield. Whoever heard of Captain America without a shield? So we picked up the royal blue-muscleless costume and headed over to the accessories. Ugh. The stinkin shield cost nearly as much as the costume. What the what? Or I could get him a shield that was fluffy and shiny and only cost $5. That boy and his lip quiver.

Princess costume, adequate Captain America costume, insanely expensive plastic shield, and the kiddos and I then looked for the oldest boy’s costume. He wanted to be Green Lantern. They had one! Oh, but not in his size and no, they would not be getting anymore in. Blurg. So we asked for the Superman costume with muscles. Nope, not in his size. “No problem!” says the guy in charge of costumes. “We do this all the time. Go ahead and buy the wrong size of the Superman costume AND the wrong sized costume for the baby and then you can call us and find out when you can exchange them!!”

By this time, my brain had become numb from saying “No we are not going to buy candy, pumpkins, fake teeth, a crown, those shoes, etc…” and the baby had barfed all over me and had, ahem, filled her diaper, so I said, “Sure that sounds like a great idea!” I think mostly because it sounded like we might finally be leaving Party City.

During our 45minute drive home in a car full of ill-fitting costumes and ill-tempered kiddos, our daughter realized she left her doll. If you know our family at all, then you know there is the firefighter, me, our two boys, our two girls, and that doll, Susan. Susan cost about $4 and without her life isn’t worth living. We should have added her to our insurance policy.

After I recounted the day’s misadventures and our kiddos disappointment (not to mention the chagrin of our checking account) I saw an ad from Target. All costumes and accessories buy one get one free! The next day I made my third trip in two days to Party City and returned every bit of our purchase. Then I went to Target and found everything for everyone for a fraction of the cost. Including Captain America with muscles, in royal blue with an awesome shield.

And the people rejoiced…

in their own way. 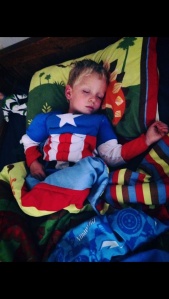 2 thoughts on “Doomsday and Halloween”