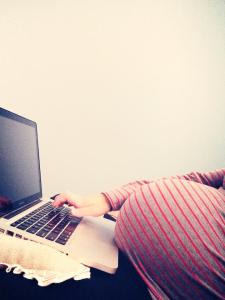 Trying to type a blog post. It was difficult.

Sorry for my blogging absence. We moved (!!) and I’m enormous so it takes twice as long to get things done ‘round here (we moved out to the country, so I am learnin’ the language. Did you know you’re supposed to say “supper” rather than “dinner”??) I thought I would write some vignettes of what’s been happening in our world. Then we will be all cozy and caught up and I will try to be a more faithful blogger henceforth.

About three months ago, the firefighter casually mentioned the idea of moving. I began packing immediately. I had our house nearly completely boxed up before we had a place to land. Then we found it. Our beautiful home surrounded by fluffy white cotton fields. Wide open space for our kiddos to leap and frolic. And the inside is just lovely. We are home and we are blessed.

We are also 45 minutes away from takeout.  Oops, I mean a fully stocked grocery store, you know, because of all the amazing cooking I do. No big d, right? Um, I have needs that cannot be met by a stocked pantry. Needs like Chipotle, egg rolls from Mama Fu’s, and Peace ‘o’ Cake Red Velvet Cupcakes… Another pregnancy hardship is nature dies out here, y’all. And then other nature eats it. And it smells. But the firefighter has the skills to find the smell, and remove the carcass. He has the wherewithal to sprinkle baking soda upon the crime scene, the cunning to leave the box of baking soda in the attic, and the genius to distribute scented dryer sheets around the offending area. Yeah, we are so country.

Today I used the vacuum cleaner to get rid of no less than ten spiders, 2 crickets, a beetle, and one yellow jacket. For real. I also used it to clean the floors.

The Bear was sick

Oh goodness. Our Bear. I’ve discovered why some men have such a difficult time when they are sick. Why they are so helpless at caring for themselves. They were, as our Bear is, a momma’s boy. The Bear has been hilariously attatched to me since the beginning. He would not allow anyone else to hold him, or even look at him for an extended period of time, until he was about 11 months old, and even then it was a challenge. When we came home with his little sister he was so stinkin’ mad at me.  Finally he got over it by firmly establishing his place as baby of the family. No matter how many babies we have, Bear will forever be THE baby.

He started coming down with a fever on Monday. By Monday evening he informed me he was too sick to wipe his own bottom after going to the bathroom. I didn’t hesitate for a second to give into this demand. It was followed by many other requests that usually only come from the petty minds of catered to rock stars.

His drink did not have the proper water to juice ratio when the ice began melting.

He only like the red yogurt bites and he could still taste the yellow ones. Would I mind bringing a new bowl that had always only contained the red ones?

He really couldn’t drink out of the frog cup when he was sick because only the superman cup made him feel better.

Three bites were too many for him to take of a cracker. Maybe a piece of candy instead?

He really didn’t like the blue blanket and would rather have the tractor one because it was softer for his body(they are made of the same material, bought at the same time).

Could I keep his sister away from him because she smells bad. I tried explaining to him  that the smell was actually coming from him because he had refused to brush his teeth or bathe for the duration of being sick.

Still, I catered to each of these whims because the child looked so sick and had such a high fever. Oh my gracious the worst melt down was when we had to go pick up his big brother from school.  In order to make that easier on us the firefighter worked hard to move things around so he could park our Yukon in the the garage. This seemed so great, then the kiddos wouldn’t have to step out in the cold. As soon as I opened the door to the garage, The Bear lost it. His irritable fevered brain couldn’t reconcile the image of the car being in the garage. It was beyond his capability to grasp and make peace with. He angry cried for about ten minutes over his daddy’s cruelly unexpected thoughtfulness.

Today he is all better. No more fever and appetite is back. While he was sick he followed me around the house, planking pitifully everywhere I went, so I spent today disinfecting everything, everywhere. I think that has been pretty easy. The hard part has been retraining him to behave like a human again rather than giving in to his inner bear. 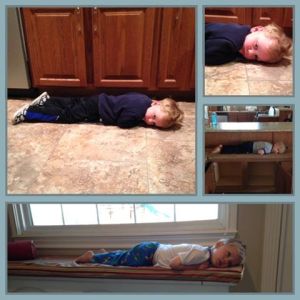 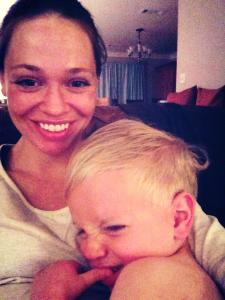