Last night Zeke (6) and Connor (2) were fighting over a toy.  Their fighting consists of Zeke repeating, “Connor can I have a turn?” over and over, like the teacher on Ferris Bueller’s Day Off droning, “Bueller? Bueller? Bueller?” whilst slowly removing the toy from Connor’s fat fists. It’s like he is trying to hypnotize Connor with the monotone.

Connor responds to this annoying injustice by squealing like a stuck pig, followed by a growl of “MINE TURN!”. Within moments they are a tangle of limbs. This may sound like an unfair fight, but they are pretty equally matched because Zeke eats like a bird and Connor eats like a college football player during spring training.

I just cannot get over how ridiculous children are when they fight. I mean, the firefighter and I do our best to set a good example.  We are stubborn, silent, and passive aggressive.

For instance, we have an armoire that I am aching to funkify for Amelia’s room. The firefighter emptied it of his stuff, then pushed it against the wall saying he would move it out to the shop “later”. Well, “later” became a week. Every time I passed it, the part of me that is desperate to use powertools and sling paint, died a little. But my husband was able to block it out and not notice this giant, unused piece of tlc-needing furniture.  So a week ago, I pushed it right next to the door, that way when he came home it would nearly hinder him from entering our home.  I thought this would be a cute way to remind him without actually nagging.

No. The armoire, like my husband and I, has not budged.

We have both adopted a never surrender attitude regarding the giant piece of furniture in the middle of the walkway. Neither of us have moved it an inch, well, unless you count the smidges of movement that occurs when one of us stubs our toe on it when we have to get up during the night.  A few days after I moved it we had a date night, so we talked with our sweet babysitter about the care of our children, showed her how to work the tv remotes, gave her the emergency phone numbers and told her to be careful not to walk into the armoire.

The firefighter has actually changed his routine from using the garage as his exit/entrance point to using the front door exclusively.  I still use the garage so I am bringing in groceries, a carseat, a spastic six year old, and a tantrum throwing two year old through the maze of stubbornness.

My newlywed sister hung out at our house last night and asked me about the armoire in the room. (bahaha. “Armoire”, instead of elephant.) I imagined her listening with interest over the very rational thing I was taking such a wise and also very normal stance on, although looking back, I realize she was probably thinking about how she and her new husband will never act so ridiculous about something so silly.  Yeah, I remember those days. In fact, we have pictures hanging on one of the walls the armoire is blocking from way back when, and as soon as one of us caves you’ll once again be able to see proof of how precious we once were. 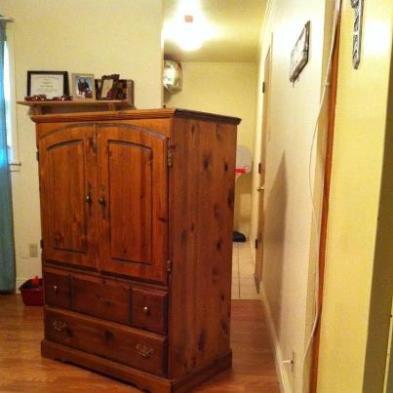 2 thoughts on “Stubborn, party of two…?”